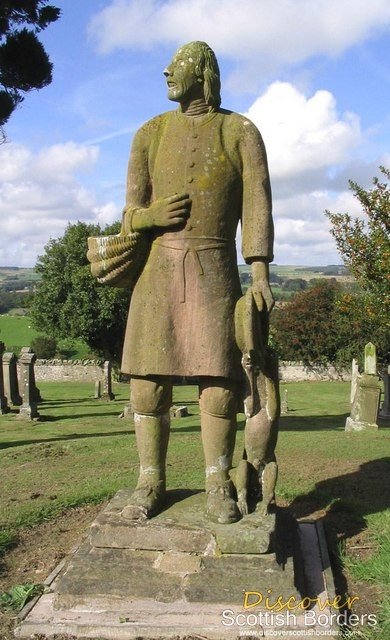 A different kind of Statue in the Scottish Borders

Willie worked at Cavers House, though he doesn’t seem to have been paid. However Lady Cavers is recorded as giving Willie’s sister “12/- for a new suit, 2/- for the making of it and 1/6 for a pair of shoes”. In other words young Willie was loved and cared for.

He ran messages, fetching vegetables for the cook and carrying bundles to and from the laundry. His likeness, complete with basket, was captured for Lady Cavers by a local mason from Denholm.

Willie didn’t take to it, and aimed a kick at the dog at its base, removing its left ear. Originally the statue stood in the walled garden, but after a couple of hundred years of neglect it was left in pieces. Now it’s been restored, and placed in the Cavers churchyard, as a testimony to the kindness of the local people.

Story goes that he was stabbed to death by the cook for probably getting the wrong vegetables.

← Prev. The Poems of Will H Ogilvie Next. Border Reivers may have used advance technology →

Adam Scott of Tushielaw was a Border Reiver known as the “The Prince of Thieves”, in this film a man goes looking for his tower, and investigates his demise at the hands of King James V

A man dreams of forgotten Scottish Borders castles, in Selkirk and on the cliffs of Berwickshire ….. but are they real??

A man searches for Yew trees in the Scottish Borders at the site of a 6th century abbey Old Melrose. None of these Yews have been recorded before.