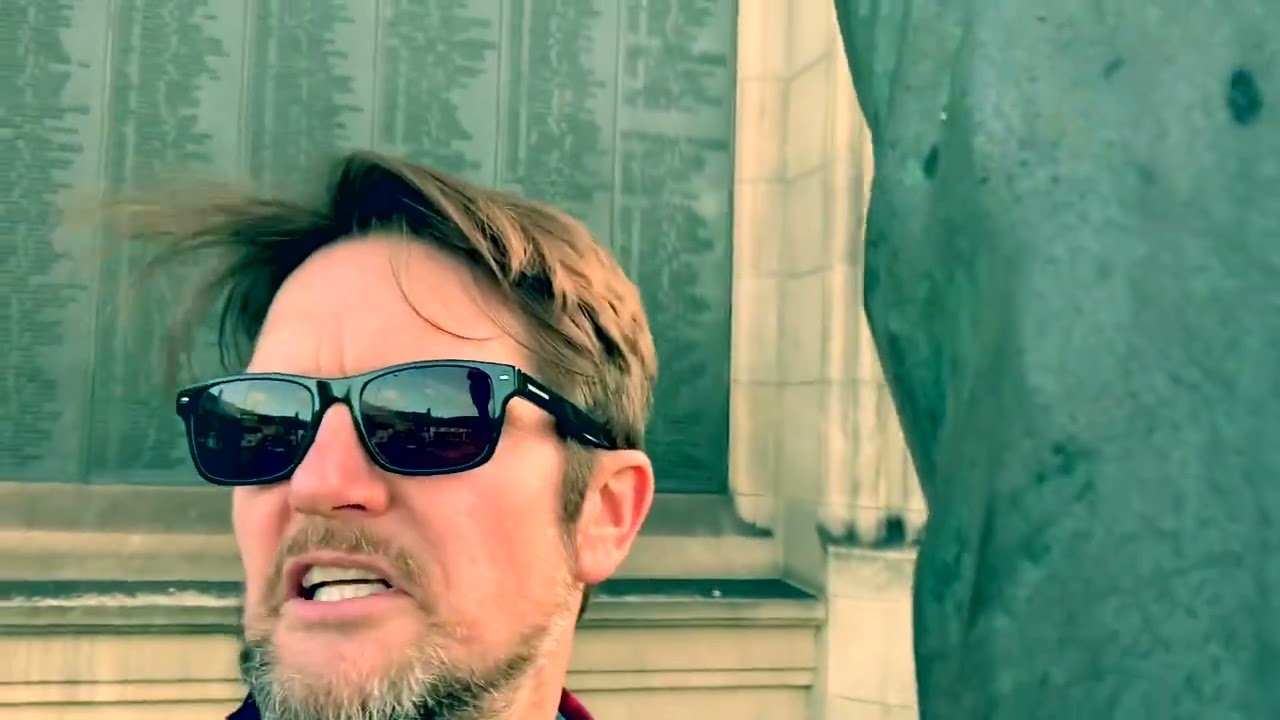 A man looks at the Border Reiver in Galashiels. Often cited as the greatest war memorial in Scotland. But why does a WWI / WWII memorial feature a 16th century Border raider??

Scotland’s Greatest War Memorial?
The greatest War memorial in Scotland?
Galashiels War memorial honours the men who died during WWI and WWII.
But why is the statue and the structure dedicated to the 15th and 16th century Border Reivers?
Is this the only modern day war memorial which harks back to the time of the Anglo Scots wars, when England were the only enemy?

Why? Why Is it that in Galashiels, we have a statue of a Border Reiver in front of our modern day war memorial.

Is this the only war memorial in Scotland to honor the dead of World War I and World War II, which also honors all the men, all the thousands of Scottish men, that were killed in the Anglo-Scottish wars, the wars against England.

It’s often cited as one of the greatest war memorials in Scotland, and you can see why. It’s a magnificent sculpture. Away from the meaning and the purpose of it, just purely the architecture and the design, the art is breathtakingly amazing.

But also it harks back to a time of war with England, a time when the Scottish Borders, in particularly, was deeply embroiled in this violent, hundreds of year of long war with England, when thousands of us lost our lives. This, for me, is one of the only war memorials in Scotland to remember that, because of this guy and the Peel Tower behind him.

How long do you have to wait before somebody is forgotten? How long before the men in World War II and World War I will no longer be remembered by us, because that’s what’s happened to the thousands of men who died in the Scottish wars of independence.

But you see, the thing about the Border Reiver statue and the war memorial in Galashiels, is it’s now inadvertently became this iconic symbol for Border Reivers and people are descendants or the Border Reiver families, all over the world. It’s became this symbol for clans in North America and Australia, and all over the world, but the thing is, people use the symbol, they use that silhouette and that statue as their emblem, but they don’t know where it is. It really is this massive tourist attraction that we should be tapping into in Galashiels.

King Arthur in the Scottish Borders

A man investigates the connection of King Arthur in the Scottish Borders.

The brothers standing stones, Smailholm tower and the Cow Stone

Bethlehem of The Borders

A man investigates the life and death of St Cuthbert from his origins in the Scottish Borders hills to the magnificence of Durham Cathedral.

A man goes looking for frightening False Widow spiders in an ancient ruined castle in the Scottish Borders.