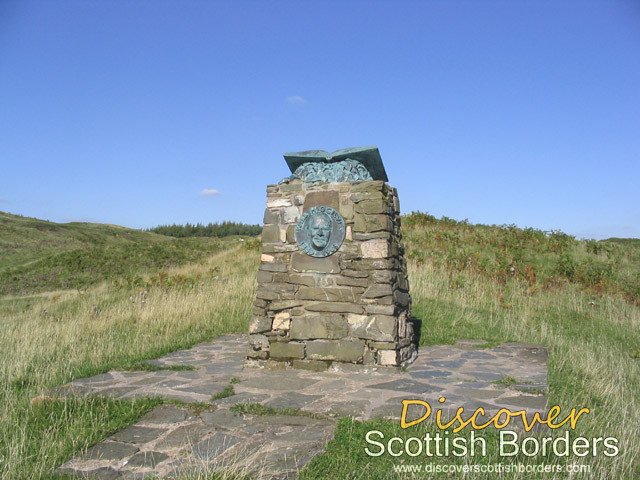 Will H Ogilvie was born at Holefield Farm near Kelso, Scotland in 1869.

Will H Ogilvie was born at Holefield Farm near Kelso, Scotland in 1869.

His adventurous nature drew him to Australia when he was 20 where he spent twelve years in The Australian Outback. He became an accomplished stationhand, drover and horsebreaker. He displayed yet another of his talents making a name for himself as a writer of romantic verse of his adventures in the Outback.

In his 94th year, in 1963, Will H Ogilvie died at his beloved home at Ashkirk. His ashes were scattered on the hillside on the road to Roberton.

In 1993, the Will H Ogilvie Memorial Committee erected a stone memorial on the spot.

And struck a mailed hand on the gate and cried in
rebel glee:

“Come forth. Come forth, my Borderer, and ride the
March with me!”

I said, “Oh! Wind of Lammermoor, the night’s too
dark to ride,

And all the men that fill the glen are ghosts of men
that died!

The floods are down in Bowmont Burn, the moss is
fetlock-deep;

Go back, wild Wind of Lammermoor, to Lauderdale
-and sleep!”

Out spoke the Wind of Lammermoor, “We know the
road right well,

The road that runs by Kale and Jed across the
Carter Fell.

But blind might ride the Borderside from Teviothead
to Tyne!

The horses fretted on their bits and pawed the flints
to fire,

The riders swung them to the South full-faced to
their desire;

“Come said the Wind from Lammermoor,”
and spoke full scornfully,

“Have ye no pride to mount and ride your fathers’
road with me?

A roan horse to the gate they led, foam-flecked and
travelled far,

A snorting roan that tossed his head and flashed
his forehead star;

Then came the sound of clashing steel and hoof-
tramp up the glen.

And two by two we cantered through, a troop
of ghostly men!

I know not if the farms we fired are burned to
ashes yet!

I know not if the stirks grew tired before the stars
were set!

I only know that late last night when Northern
winds blew free,

A troop of men rode up the glen and brought a horse
for me!

← Prev. Talla Reservoir - A man made beauty Next. William Leggat of Cavers →

The graves of Border Reivers are few and far between.
In this new film we go looking for one of the most notorious of all ….Kinmont Willie Armstrong’s burial
place..

A man searches for an old Border Reiver tower deep in the forests of the Tweed valley in the Scottish Borders.

All Under One Banner, peaceful demonstration march against Westminster rule in Scotland. Thousands of people took to the streets of Galashiels on 1st June 2019 to show their support for Scottish Independence.

A man unwittingly captures a strange figure on film at Hermitage Castle while filming a video about the Borders Reivers.