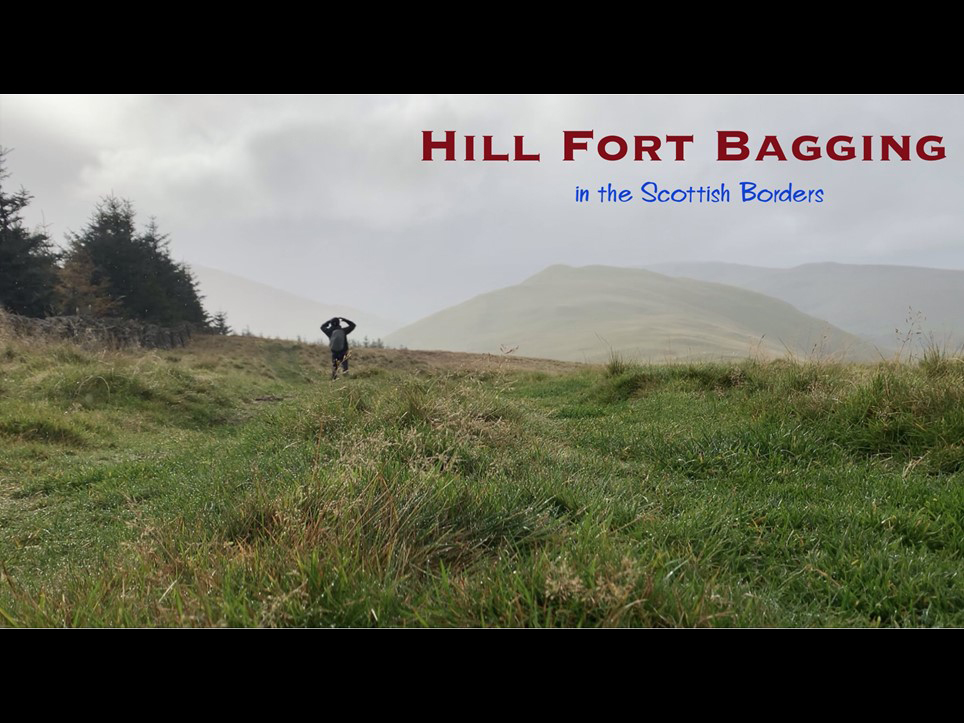 Walking among the hills of the Scottish Borders is a very different experience to navigating the dramatic peaks and troughs of the Scottish Highlands or English lake district. Rather than the almost “man-versus-mountain” instinct the big hills further North or South stir in us, the Border Hills for me bring out a “man-with-mountain” mentality. A seemingly warm and welcoming camaraderie, to a place man has not only conquered, but lived in and called home. You don’t want to be getting too comfortable however, these hills are still remote and wild and must be treated with respect.

Men have lived on these hills for millenia, and although not always apparent at first the stunning evidence is everywhere. Today I decided to venture out into the hills and find one of these ancient settlements, better known as hill forts. Iron age hill forts are all over Europe, but here in the Scottish Borders we have a higher density of them than anywhere else. If you are interested in history that makes walking in the Border Hills a veritable feast of interesting finds, some it would seem hitherto undiscovered, or only discovered a few times before at least.

The exact number of forts quoted as surviving in the Borders is four hundred and eight! An astonishing number for such a small area, if you visited one per week that would keep you busy for 4 years!

As I left the busy Borders town of Peebles today the rain was coming in but that did not detract from the glorious Autumnal scene which greeted me from every angle, almost surreal in its collage of colours. You are only a few minutes from Peebles however when this golden patchwork and familiar smell of browning leaves suddenly seems far away and you are transported to a land of high hills, howling winds and misty remoteness.

Just outside of Peebles are some of the highest hills in Southern Scotland, with Broad Law being the highest at 840 metres. But today my walk was only a 5 mile round trip.

Cademuir hill fort is one I had never visited before, as I began the walk it was difficult to ascertain exactly which hill was Cademuir, but as I crossed the brow of a small hillock that doubt was extinguished, before me stood the massive, ridged mass of a hill that cannot be mistaken. A place swirling in mist and swirling in history. You can just imagine the chief of an early tribe in this area proclaiming “that hill, will be MY castle”

All around Cademuir stand the big hills of the Southern Uplands, a vista so huge, so bleak, you can’t touch it or taste it, you can only sense the otherworldly isolation out there. As you approach the foot of Cademuir it feels like the gates of a great city, which in some respects it probably was 2000 years ago. A welcome retreat of safety and refuge from the wolves, wind and wilderness.

You can begin to see the human scars all over the hilltop as you approach the summit. There are vast deposits of rock form the walls of the fort all along the North side, and on the top are clear ditches from the construction. The East side of the Hill is extremely steep almost cliff-like. The views in all directions are uninterrupted and even on a misty, rainy day like today are immense.

It’s not difficult to transport yourself back in time, to when the Selgovae tribes lived on this hill, their marks are everywhere and their spirits survive in this place too. Who knows perhaps the people that lived on this plateau were my distant ancestors.

As I make my way back to Peebles I begin to plan my next four hundred and seven trips to visit the rest of the Scottish Borders amazing Hill Forts!

← Prev. Scottish Borders Hill Forts...HOW MANY?! Next. Music of the Trees →

A man notices a similarity between 2 statues in Galashiels and Carlisle.
And then goes on the trail of the most notorious of the Border Reivers, Johnnie Armstrong.

Galashiels to the Black Hill

A man treks 12 miles from Galashiels to Black Hill near Earlston taking in some history and scenery on the way.

A man investigates the eerie Whytbank Tower, Clovenfords in the Scottish Borders with some alarming results.