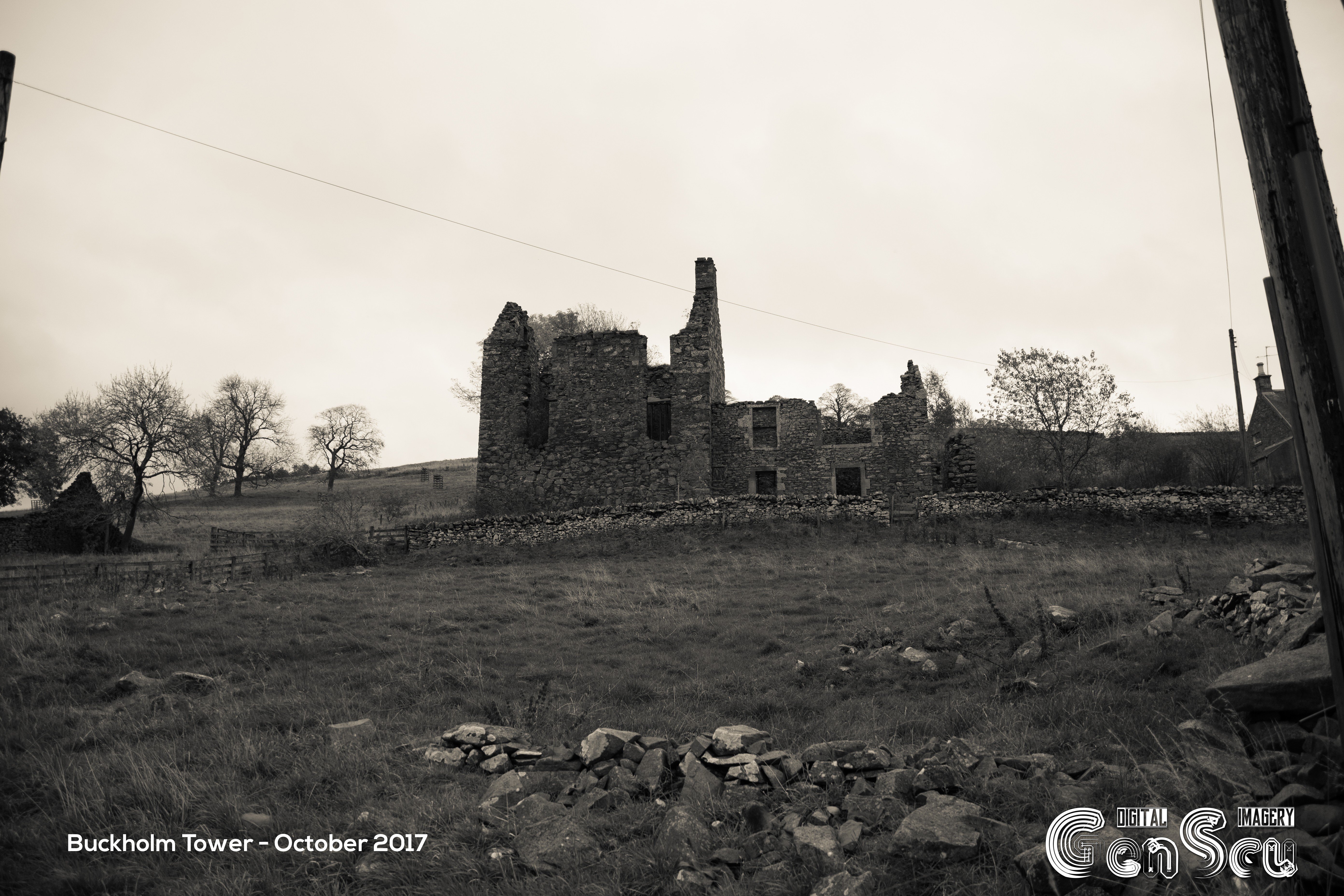 In pictures - Buckholm Tower and a Ghost Story

Pringle was an evil man who so ill-treated his wife and young son that they eventually left him. It is said that no woman was safe in the Tower and his cruelty was common knowledge for miles around. His favourite past-time was tracking down covenanters with is two ferocious hounds.
Known as a loyal Government supporter, Pringle was called upon one day by the captain of a troop of Dragoons to assist in the break-up of an unlawful assembly of covenanters on nearby Ladhope Moor. Pringle was only too pleased to assist and shrewdly guessing the exact location where the religious dissenters were most like to be, led the Dragoons to the exact spot. However the unlawful assembly had received some prior warning of the raid and had already dispersed, with the exception of two men, Geordie Elliott, whose wife has once been in Pringle’s employ, and his son William. Old Geordie had been thrown from his horse and was badly hurt. William Elliott had stayed by his father’s side. Both were well-known covenanters.

The wicked Laird of Buckholm was all in favour of disposing of the two men on the spot but Captain Bruce, of the Dragoons, felt that they might be able to provide some valuable information about their fellow covenanters and thus it was arranged that Pringle would hold them prisoner at Buckholm for the night and the Captain would send an escort to collect them the following day.

Back at Buckholm the two unfortunate men were thrown into the dungeon and the Captain and his Dragoons left. Pringle dined and drank brandy and as he became more and more drunk he became more and more ill-tempered. At length he lurched to his feet and made for the dungeon. At the doorway he met several of his servants who had been disturbed by calls for assistance coming from within. Old Geordie Elliott was in a bad way as a result of his fall and William Elliott was pleading for help for the old man. Pushing the servants to one side, Pringle entered the dungeon and the waiting men heard sounds of heavy blows, strangled screams and a dragging noise before total silence. Then the Laird re-appeared. Pushing past the servants, Pringle was just about to return to the study to consume some more brandy when there was a loud knock on the entrance door to the Tower. One of the servants hurriedly opened the door and outside stood old Isobel Elliott. She had come in search of her husband and son.

Muttering a drunken oath Pringle grabbed the old woman and dragged her down to the dungeon. A loud scream came from the woman as she saw, hanging from hooks attached to the old oak beam, the bodies of her two menfolk, appearing more like carcasses of meat. The distraught woman staggered from the dungeon, fell to the ground and sobbed uncontrollably. The wicked laird looked down upon her, calling her an old witch. The old woman slowly dragged herself to her feet, her eyes burning with hatred. She faced the drunken laird and cursed him for what he had done.

From that time on Pringle was convinced that he was a haunted man. He was firmly convinced that he was haunted by ghostly hounds who could, and did, attack him at any time of day or night. Time after time his servants burst in upon him after hearing his screams to find him beating off unseen hounds. He would stagger off his horse after a long and furious ride pleading for his servants to save him from the ravages of unseen hounds that were plaguing him. Shortly afterwards Pringle died a painful death and even at the point of death he was still racked with convulsions as if still being attacked by the unseen hounds.

As the first anniversary of the laird’s death approached, a ghostly figure was seen in the vicinity of the Tower, running for his life, towards the entrance, from a pack of baying spectral hounds. The following night everybody in the household heard the baying sounds and a voice calling for help, followed by a loud banging on the front door of the Tower. The voice sounded just like that of the former laird but when the door was opened the sounds ceased completely and the courtyard was found to be totally deserted. The sounds were heard again the following night, the first anniversary of the laird’s death, but this time they came from the direction of the dungeon.

A man searches for a legendary underground cavern. Seemingly only accessible through a long tunnel on a beach. Long lost and forgotten, not on any maps…. is it real?

A look at 3 mysterious standing stones in the Yarrow Valley, Scottish Borders….what do they mean??

A man investigates the murder , in 1685, of a Covenanter based soley on his religion amid the stunning scenery of Tweedsmuir and the Scottish Borderlands.

Music of the Trees

A man uses a clever piece of tech to convert electric impulses of plants into music. He goes searching for the legendary ancient Yew Trees at Traquair in the Scottish Borders to hear their song.